I have been hearing about the geological wonders of Strange Lake for years. Peter Cashin has been very gracious in offering a trip for the past three years. Last week, everything finally fell into place.

Strange Lake is located at the yellow pin on the map: 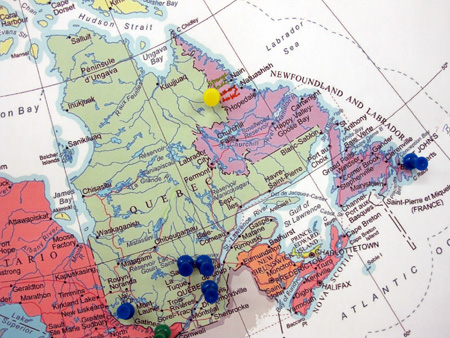 Strange Lake is one of the most picturesque places I have ever visited. Granted, we visited during what may have been the best week of weather all year (with very few flies), but it was still fantastic! First off, let me say that Strange Lake is actually located at Lac Brisson — not “Strange Lake”.

The beautiful Lac Brisson is pictured below: 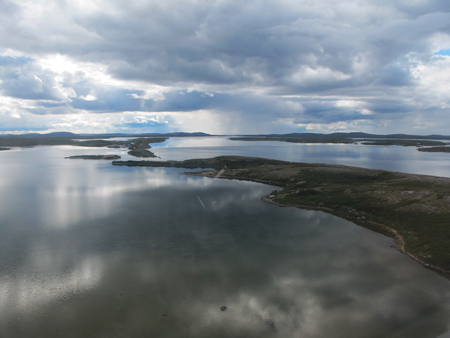 My trip actually began in Toronto with a late snack with Mehdi Azodi, the Director of Corporate and Investor Affairs for Quest. Mehdi walked me through the latest developments at Strange Lake, gave me some details regarding the site visit, and then informed me he would pick me up early and take us to the airstrip. The next morning, Quest literally rolled out the red carpet as we boarded the chartered jet for the 2 hour 20 minute flight to Goose Bay: 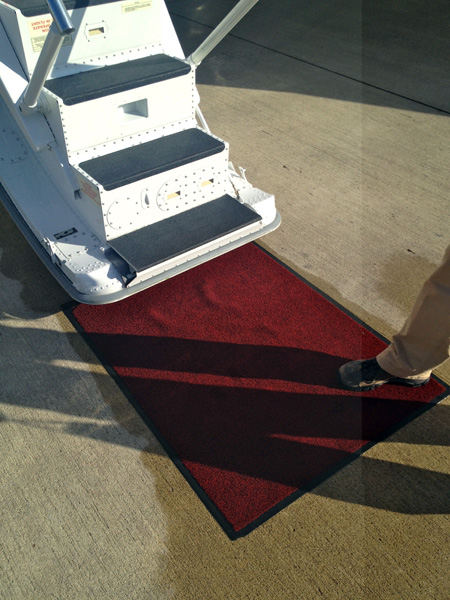 There were over 15 of us taking part in the site visit, so we gathered in Goose Bay to board another charter flight bound for Strange Lake. We landed 1 hour 20 minutes later on Quest’s airstrip at the edge of the B-Zone, built on the banks of Lac Brisson: 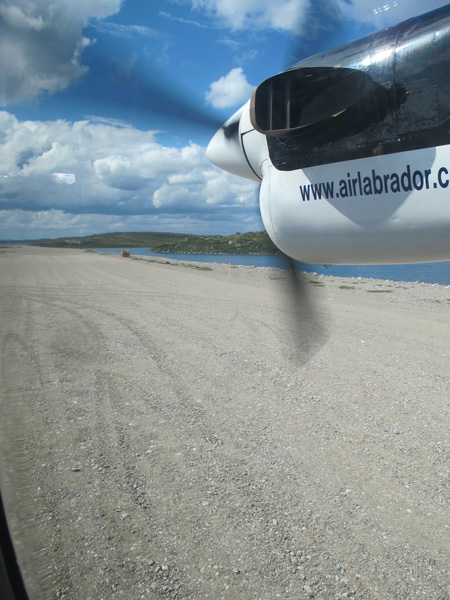 Shortly after landing we were told we could either ride to camp or take the short walk. I opted for the walk, and was able to stroll through the B-Zone with a friendly group on the way to camp: 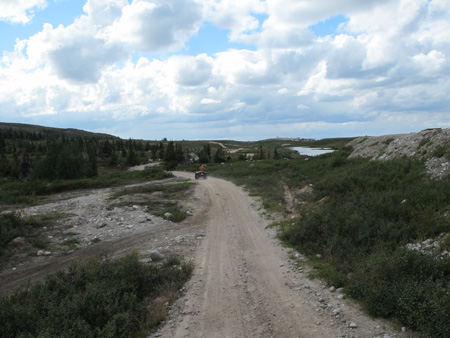 We had a few minutes to acclimate to camp before the safety orientation. Quest has established an excellent camp here, with great facilities, and (most importantly) a first-class kitchen staff. Granted, I wasn’t trekking to northern Quebec for the cuisine, but the victuals shouldn’t be ignored — every meal was great, and there were plenty of wonderful surprises. From crepes and cakes to an unexpected lobster fest (!): 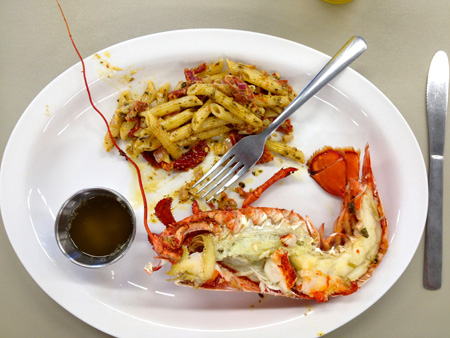 No one is starving at Strange Lake!

After dinner, there were presentations regarding the processing of ore from Strange Lake led by Colin Lindsay, Vice President of Operations. He spoke about possible beneficiation processes and using a solvent extraction process to remove Zr, then Nb/Ti, followed by Th/U, and finally the REEs. Processing Strange Lake ore is a very big question for me, as they are using an approach that hasn’t been used yet (to my knowledge) in the rare earth industry. Peter Cashin has invited me to see their mini pilot plant when it is up and running this fall, so that I can understand their process better. I am looking forward to that!

I then turned in early — wanting to get plenty of rest for the big day. After breakfast the next morning we met at the coreshack for explanations of the drill program, geology, and mineralogy. 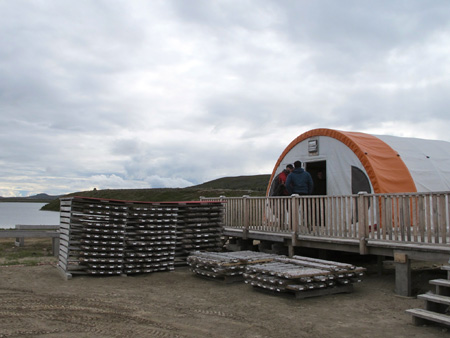 While in the coreshack, we were given an explanation of Quest’s drill program as well as an excellent description of the minerals at Strange Lake. Patrick Collins and Anthony Williams Jones (aka “Willie”) led the discussions and we were able to see some kainosite (the yellowish material below)… 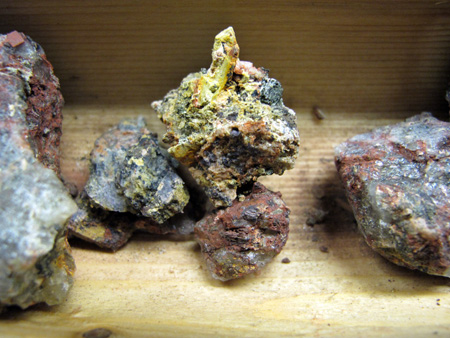 … as well as a host of other minerals in the core samples.

Willie explains that the kainosite and gadolinite were formed at relatively low temperatures (~100-150 C): 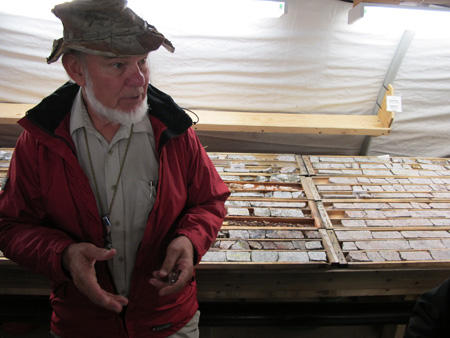 To add some pizzazz, the Quest team turned out the lights and showed the effect that UV light has on the various minerals: 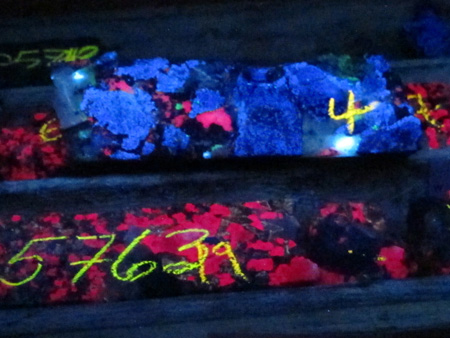 At this point I was expecting a disco ball and some 1970’s jams, but we had to settle for “I Just Want to Celebrate” (by the band Rare Earth, of course) blaring from some tiny iPhone speakers. We were told that REE-bearing minerals at Strange Lake include (but are not be limited to):

We spent quite a bit of time looking at core and watching Quest demonstrate the use of their Niton portable XRF. Then it was off to walk the B Zone.

As you walk toward the B Zone, you see the remnants of Iron Ore Company’s (IOC) original mining camp: 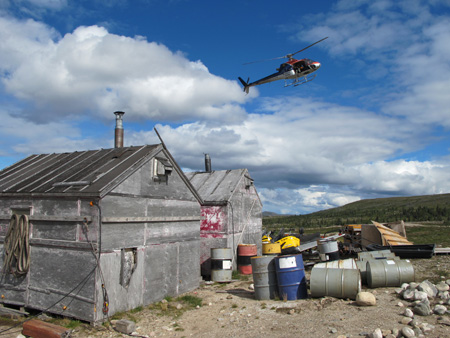 You can see the green hillside of the B Zone in the background. Curiously, the early geologists here would hike through the B Zone (which was not known as the B Zone back then) and then over the hill 3 kilometers to get to the Main Zone. All the while, the mineralized B Zone was underfoot. Kicking rocks is tough business, but with new innovation and determination, the Quest team found the B Zone. We walked up and spent quite a bit of time at the bulk sample pit on the side of the hill. We were able to collect several samples with Peter Cashin jumping into geologist mode and busting up some rocks for us. The sample below wouldn’t fit in my suitcase, but we were told that the dark mineral at the lower left was allanite: 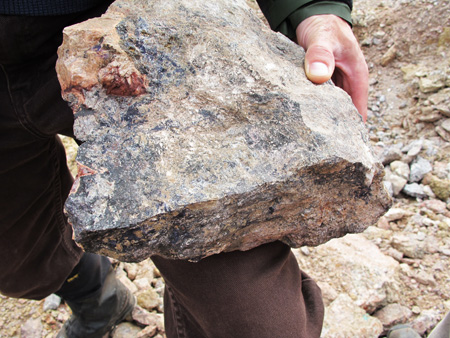 After collecting samples, we traveled about 400 meters through gently undulating terrain to an outcrop of fluorite. The geologic significance was lost on me (and it was outside the boundaries of the B Zone), but this area is a zone of interest that Quest may come back to in the future. Here is some of the pretty purple rock (fluorite): 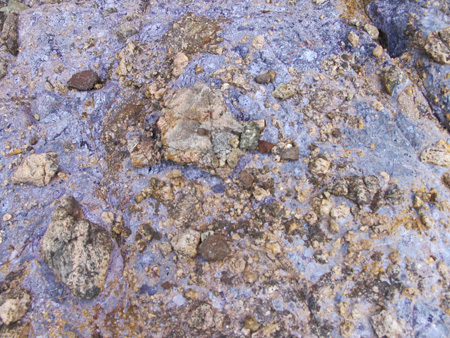 We then headed back for lunch. After lunch we headed to the helipad for another safety briefing and then a quick ‘copter trip to the main zone. We look on while the 3rd group lands: 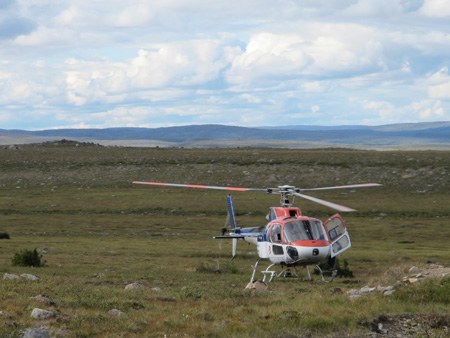 It took four chopper flights to get us all over to the main zone, so there was a few minutes for us to wander about and look at the rocks at old bulk sample pit. The main zone practically straddles the border of Labrador and Quebec, but of course you can’t see any lines out here — it looks fairly wide open to me! Peter Cashin was kind enough to show me the Quest discovery hole: 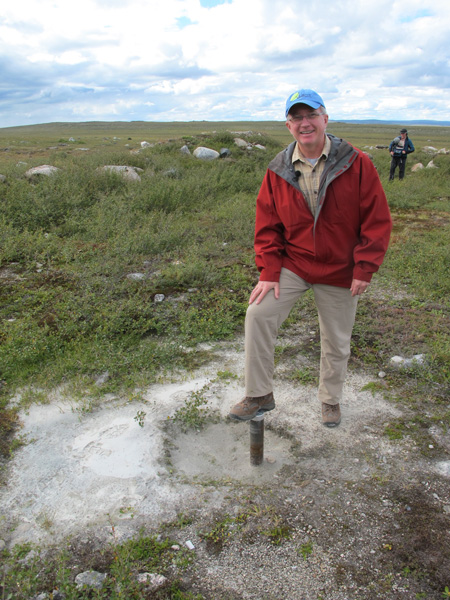 When the group was all present, the geologists described the Main Zone in detail: 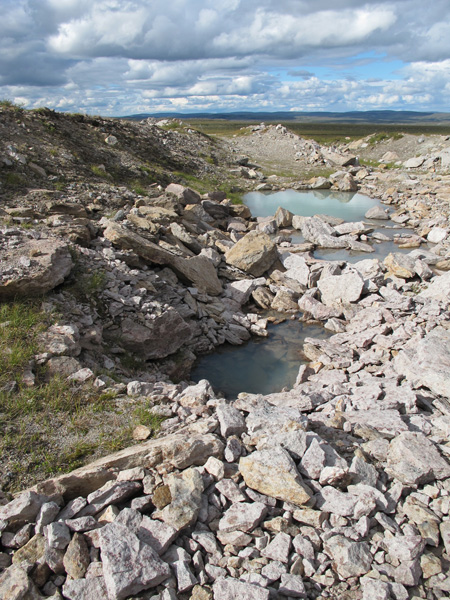 When asked why IOC chose to dig here, the answer was that there was the least amount of overburden here–not that it was necessarily the richest geologically. We were able to see very clear examples of the mineral gittinsite (it is the reddish brown mineral on display in the sample below): 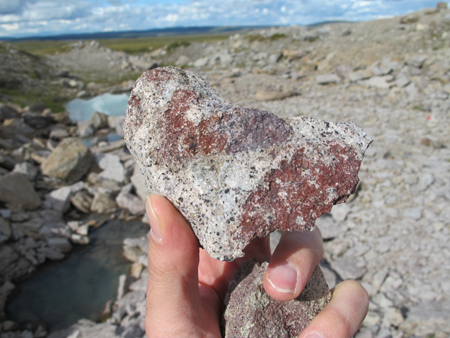 Four of us (led by Mehdi Azodi) thought it might be a good idea to traverse the marshy landscape back to camp. As we jumped from rock to rock, grass lump to grass lump, occasionally sinking to mid-shin in the muck, we realized that this was one of the most fun parts of the trip! Then Mehdi decided that we should race the chopper back — oof! Over a week later and I’m almost recovered!

Later that night Willie gave us his commentary on what he believes occurred to create the Strange Lake deposit. He spoke in animated brilliance about hydrothermal alteration (which he referred to as “hammering”), pegmatites, hypersolvus and subsolvus granites. Willie stated that he believes that Strange Lake may be part of the Gardar Rift Zone (part of which is now in Greenland), but that here is Canada it got “hammered”, while in Greenland it did not.

My heartfelt thanks goes to Peter Cashin (thank you for your patience), Mehdi Azodi, Colin Lindsay, Pierre Guay (for organizing the logistics on the ground), Patrick Collins, Willie Jones, and the incredible chefs!