On June 1, Molycorp held a tour for about 100 delegates from the recent Metal Pages’ Metals for Energy and Environment Conference held in Las Vegas. We all met just before lunch at the Green Valley Ranch hotel entrance, loaded up into 4 medium sized luxury-liner buses, and began eating our Panera box lunches on the way to Mountain Pass — Yeeeee haw!

We were scheduled to have a safety briefing before touring the facilities, but it was really more of a Molycorp presentation with an extensive Q&A session. Frankly, I was surprised that they let the Q&A go so long — the questions were getting pretty exciting towards the end. I learned a lot during this session, and I was impressed that Molycorp spent as much time answering some tough questions as they did:

They addressed their estimate of China’s cost of production being $5.58/kg — saying that it was the best numbers that they could get for an apples to apples comparison out of China. For reference, Molycorp is claiming a cost of $2.77/kg with Lynas at $10.11/kg. In the end, we will have to wait until both are in production to know the real numbers.

Molycorp answered a question about the viability of XSORBX in the marketplace when cerium was above $11/kg.

They said that Silmet (a recent Molycorp purchase in Estonia) was still receiving feedstock for their operations from Russia, but that Molycorp would be providing lanthanum precipitate concentrate, some residue, and bastnaesite concentrate.

They would not answer questions regarding their flowsheet (completely understandable).

The one question that was not answered, but that I have now heard asked now at several venues, is “how much dysprosium and terbium will be produced?”

After the Q&A, I had a look at some of the displays in the presentation room. The first was of bastnaesite ore: 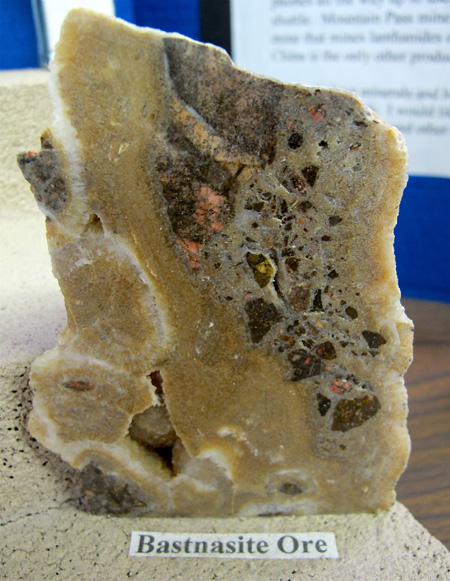 The also had a display of oxides and bastnaesite concentrate (lots of pretty colors!): 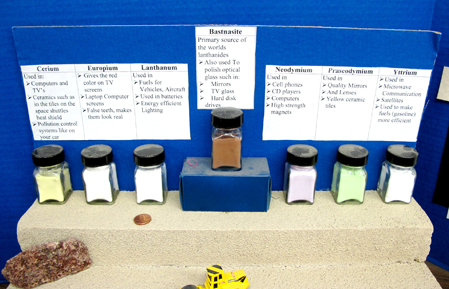 Soon it was time to throw on some hardhats, load up the buses and head out to the site!

The first stop was at the viewing platform for the pit. They have changed the platform location since the last time I was there — it used to be on the other side of the pit (at left in the picture), but the view is still good: 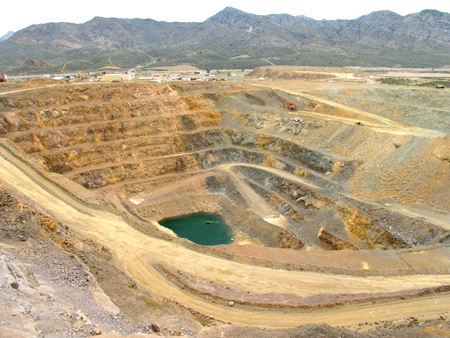 We stayed there for about 10-15 minutes and had more Q&A with our Molycorp representatives as we enjoyed the breeze from atop the mighty Mountain Pass! We were told that the feedstock runs about 8-10% REO, but that areas of up to 35% REO exist. Here’s a view of the bus and our nice, shiny blue hardhats: 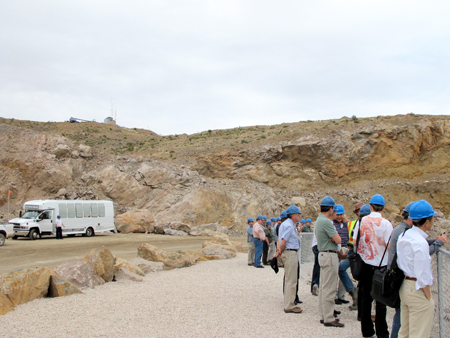 The next stop was a viewing platform (in the form of a flatbed truck with railings) of the freshly made processing pad: 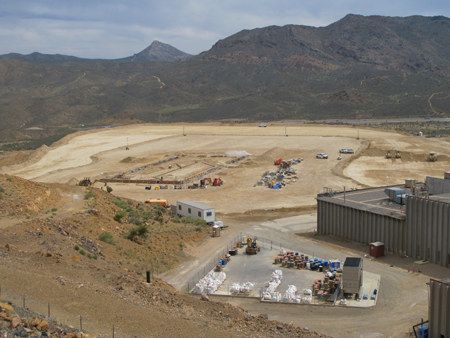 The pad is a total of 36 acres, and will have separations, CHP (their new power plant), salt recovery and other ancillary facilities. We were told that they will have a total of 250 mixer/settlers onsite for their separations operation — with 180 of these being dedicated solely to didymium. Here is a picture of the building that will be refurbished to house the didymium operation: 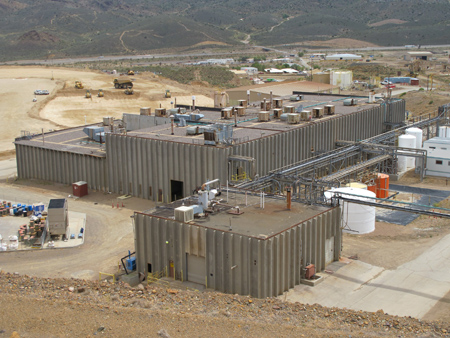 All-in-all, it was a very worthwhile trip with plenty of Molycorp staff available for questions, and plenty of evidence that they are diligently spending their shareholders money and making some progress. I wish that we had gotten a closer view of the facilities and a walk-through of some active operations, but a hundred people milling around bumping stuff doesn’t sound like a great idea!

Special thanks to Molycorp, their staff, and Nigel Tunna and the Metal-Pages staff. It was a wonderful trip!