It was stated at the Technology and Rare Earth Metals for National Security and Clean Energy (TREM) Conference in Washington DC on March 17-18, that there are two modes of energy policy in Washington:

This may prove true for the rare earths as well. Please don’t misunderstand, the Conference was filled with intelligent and fantastic conversations, but the mood has changed and it is now clear that this issue is beginning to gain some favor in Washington DC. 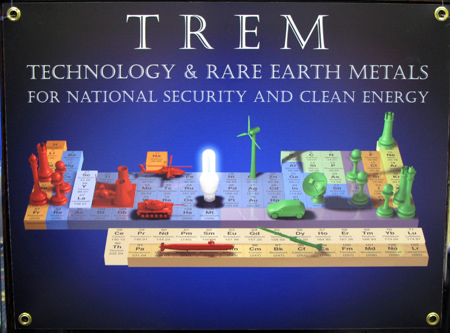 Now for some highlights!

Dudley Kingsnorth of IMCOA had plenty of insight to share with the audience. At one point, he spoke about the importance of the pilot plant phase for rare earth exploration companies. Pilot plants are built in order to establish the flow sheet and according to Kingsnorth are required to:

The real shocker that Kingsnorth revealed didn’t seem to garner much fanfare, but is critical to this discussion and should change the tenor of discussion: Rest of world (ROW) demand has been lower than exports since 2005. In other words, all the hype about China shutting off the rest of the world isn’t necessarily backed by the facts. At this point, the Chinese export quotas have easily accommodated the demand by the rest of the world for material outside of China. This opens up other discussions, but may change the character of some of the arguments being made.

Constantine Karayannopoulos of Neo Material Technologies Inc. offered some great perspective as president and CEO of a company that operates facilities within China. He pointed out that China has one strategy in the rare earth business – employment growth. Provincial governments are judged on job growth.

His final points for the audience were:

Paul Werbos, the Research Program Director of the National Science Foundation, reinforced Karayannopoulos’ last point. Werbos emphasized that R&D can have a dramatic effect, and he pointed out that new cross-disciplinary research might maximize the probability of breakthrough designs.

Gareth Hatch of Dexter Magnetic Technologies explained some of the issues surrounding new wind turbine capacity and its demand for neodymium (Nd) oxide moving forward. For instance, he pointed out that demand for Nd in wind turbines might reach 2,950 tonnes by 2013.

Peter Dent of Electron Energy Corporation stated that samarium-cobalt is a $300 million industry and that ferrites (magnets based on iron technology) still retain a 90% share of the entire market.

Sheeraz Haji of Cleantech Group LLC spoke of the revolution in financing for green technologies, as the percentage of venture capital that goes into green tech has risen from less than 2% in 2003 to a predicted 27% in 2010. Wow! That is significant. He pointed out that 72% of global cleantech investment is happening in Asia / China. This is very startling.

Steven Duclos of General Electric Global Research had some fantastic perspective on REEs and strategic materials. He showed a criticality diagram which displayed the supply and price risk associated with individual elements and their potential impact on General Electric.

He is very aware of the effect of supply issues, and suggested that parallel paths must always be taken because you don’t know which path will be successful.

One of the great charts that he used showed the elements used to make incandescent lamps, fluorescent lamps, white LEDs, and White OLEDs. The surprise? No rare earths at all in the white OLEDs.

David Sandalow, the US Assistant Energy Secretary for Policy and International Affairs, had much to say regarding rare earths.

“It goes without saying that diversified sources of supply are important for any strategic material. So too are substitutes and strategies for re-use and recycling. If rare earth metals are going to play an increasing role in our economy, we need to pursue those strategies. And there’s every reason to believe that rare earth metals could play an increasing role in the global economy as the world transitions to clean energy.”

To address the availability of REEs and other strategic materials, Sandalow suggested a three-part approach:

He also announced the proposed development of a strategic plan:

“To help address these concerns, I am today announcing that the Department of Energy will develop its first-ever strategic plan for addressing the role of rare earth and other strategic materials in clean energy technologies. The plan will apply the approaches described above and draw on the strengths of the Department in technology innovation. We will build on work on these topics already underway, including in DOE’s national labs, and work closely with colleagues from other agencies throughout the U.S. government. We will solicit broad public input, including from the stakeholders and experts here in this room.”

Sandalow mentioned that there was lots of work underway already, and that there were no firm timelines yet in place.

His talk was well received by the audience, and we look forward to hearing more.

Full Metal Jacket, a panel discussing rare earths from the Pentagon’s perspective, addressed the complexity of assessing the both the Big Picture and specific needs. Some of the issues raised during the panel were:

*Looking at both civilian and military uses for REEs
*The DOD doesn’t buy rare earths – it buys tanks, ships, guns, etc.
*There is no national strategy on REEs thus far
*They are looking at cradle to grave issues with materials

Mark Smith of Molycorp Minerals pointed out on the producer’s panel that it is hard to find qualified people with REE skills.

Congressman Mike Coffman spoke about HR4866 – a new rare earth bill that he had just introduced the day before. From the bill:

Many people in the audience have been watching this closely, so it was great to have Congressman Coffman talk about this with us in person.

Cindy Hurst gave a good talk on the history of China and the rare earth industry. She has written a paper entitled “China’s Rare Earth Elements Industry: What Can the West Learn?”.

We spent the afternoon of the second day in breakout sessions that were both fascinating and illuminating, as this diverse group of participants was able to discuss and debate these issues together.

Special thanks to Dr. Gal Luft and Yaron Vorona for putting together one of the best rare earths conferences I’ve been to!