We received this warning a number of times before we stepped foot at Mount Weld. People die out in the bush — an Aboriginal had recently died in the area. We flew into Laverton from Perth for our visit, and Laverton is hundreds of kilometers from anywhere (730 km to Perth, 930 km to Ayers Rock). So why, in mid-summer at 40 degrees C (104 F), would anyone want to visit Laverton (population ~500)? To see some rare earths, of course!

So, welcome to Laverton: 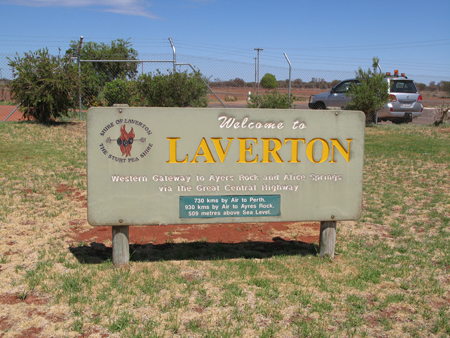 Traveling on this short adventure were several Lynas employees, several analysts, Dudley Kingsnorth, and yours truly. I think there were nine of us on the plane.

After we landed, we drove the short distance to Lynas’ Laverton office, which is a house on a nice quiet street. At the office we received our steel-toed boots (very comfy, by the way), hardhat, day-glow vest, and some water. We had a look at the mine site diagram below. What the diagram doesn’t communicate is how large the site is — those ore grade piles are fairly massive. 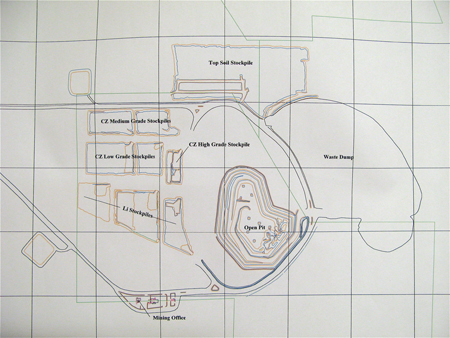 We then listened intently to the safety orientation. Drink lots of water, know where the rally point is, stay with your Lynas-appointed guide, and whatever you do, “Do NOT go into the bush!”

The mine is a bit of a distance out of Laverton, so it offered us the opportunity to see this incredibly dangerous bush in all it’s splendor: 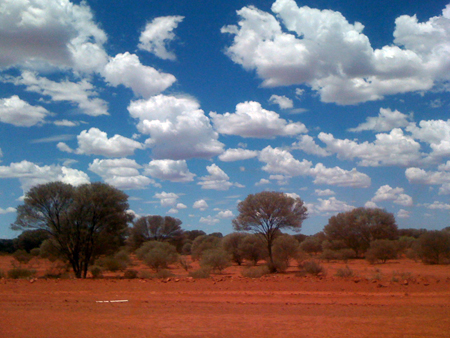 Australians must think that Americans are suckers for kangaroos (we are!) — for just as we pulled up we were greeted with what has become (for me) the mandatory encounter with Australia’s most famous bouncing beast! 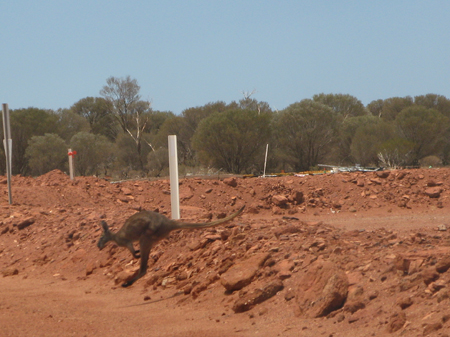 After identifying the emergency rally point and becoming familiar with the emergency water location, we drove the short way to see what we had come for — the pit at Mt. Weld:

It is 51 meters to the pit floor, and the contents have been placed all around the pit in orderly piles of overburden, topsoil, and ore. The Southern Zone is found at right in the picture above. This is where they have found some HREE mineralization mixed with the LREE. The ore body itself begins below the reddish overburden.

Just for the record, there is no mountain at Mt. Weld — and not because they have blasted it into oblivion. It has been flat here for the duration of recorded history.

Dr. Anthony N. Mariano says that he first discovered the supergene monazite mineralization at Mt. Weld from core samples in 1980. And Mt. Weld was certainly known earlier than that. It is fascinating to think that the rare earths have been known here for 30 years, but they’re just now finding their way out of the ground! Mining, like the geological events that make it possible, seems to move slowly. 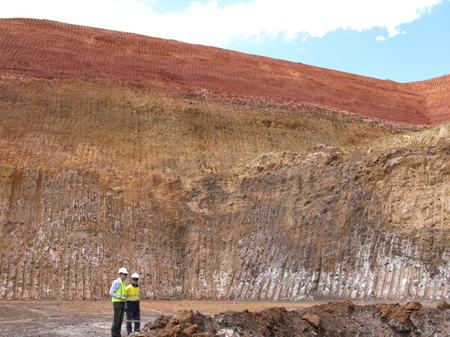 Pictured above are Eric Noyrez and Al, the surveyor. They are standing near the Southern Zone on the pit floor. Mr. Noyrez is the recently appointed COO for Lynas. From the December 10 press release:

The Directors of Lynas Corporation Limited (ASX: LYC) are delighted to announce that Eric Noyrez has been appointed as the new Chief Operating Officer of Lynas.
Eric has extensive senior management and board level experience in major multinational industrial and chemical companies. He also has detailed knowledge of the international rare earths industry.

It was extremely helpful to have Mr. Noyrez on the tour — he offered many anecdotes and insights from his time at Rhodia managing their rare earths division.

After spending a bit of time in the pit looking at the mineralization, we headed back up to the surface to gaze at the money rock. 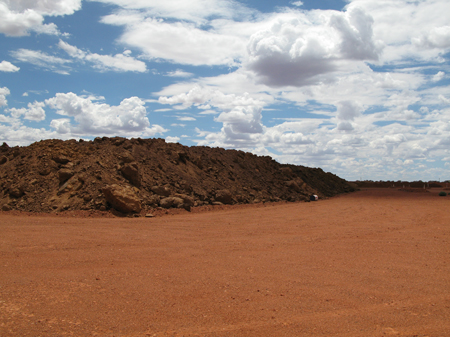 773,000 tonnes of ore is stockpiled at surface according to grades ranging from 8-26% REO. The picture above is of the 8% stockpile, whereas the picture below (with analyst for scale) is the 26% stockpile. These numbers may seem high, and they are, but keep in mind that they Lynas won’t recover all of that in their process — no REE mine does. 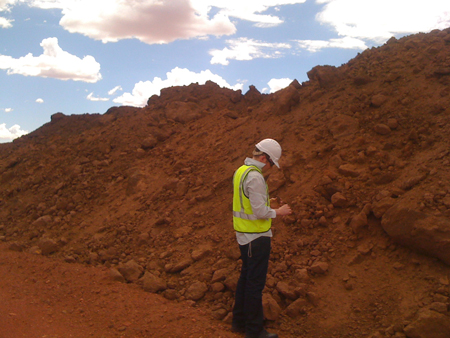 Pictured below is an ore sample from the 26% stockpile. It is very soft, and can be easily broken by smashing them against each other. Notice the powdery mineralization coming off in my hand! Unfortunately, all I have is this picture and my memories [sad violin music playing in the background], as this is the first rare earth site I have ever been to where they wouldn’t allow me to collect samples. 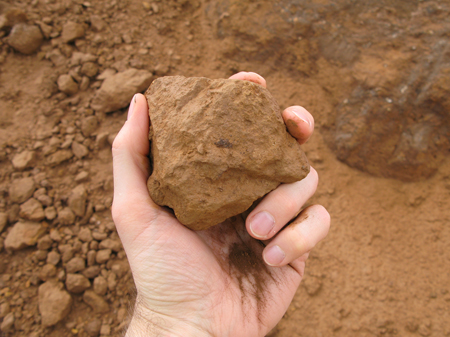 After spending some time at the ore piles, we drove 1.5 km to the site of the concentrator. The concentrator consists of three cement structures: unloading (where the trucks deposit the ore), the ball mill (where the ore is ground to specification), and the flotation facility (where the finely ground ore is upgraded). The end product of the concentrator will be a 40-42% REO concentrate which will then be shipped to Malaysia for separation into individual elements.

These structures were mothballed, and construction ceased, when Lynas had funding issues last year. These funding issues have been resolved, and Lynas now has the money necessary to proceed.

Pictured below is the current structure for the ball mill: 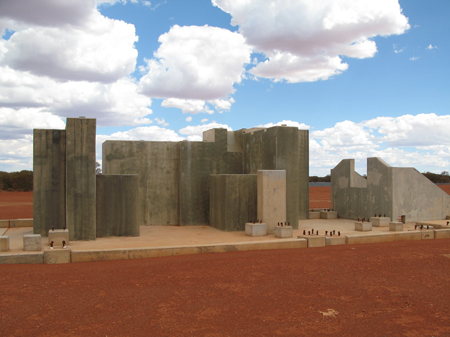 Pictured below is the structure for the flotation plant: 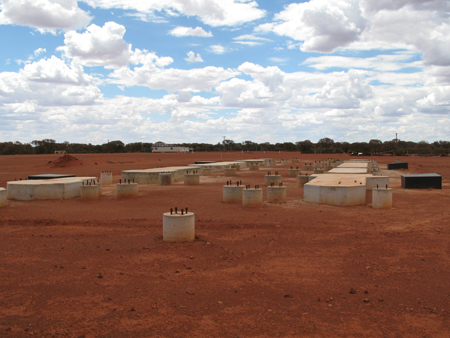 Overall, it was a great trip.

Lynas has accomplished something very few REE companies can claim — they have built a mine and pulled REE ore out of the ground.

Now we await the completion of the concentrator at Mt. Weld and the separations facility in Malaysia. The concentrator should be pretty straightforward, but the separations facility is a very complex operation, to say the least. Lynas is planning to build the largest processing plant for rare earths in the world, and are currently targeting Q2 2011 for its completion. This seems to be a very aggressive timeline, but we will watch with great interest.

Special thanks to Matthew James for arranging the trip and being a great host, Dudley, Eric, John, Tony, Geoff, Al, and everyone else that made the trip a success!