Tuscaloosa, AL On June 22-26, more than 150 researchers from seventeen countries met at the University of Alabama’s Shelby Hall to share and discuss the latest developments in lanthanide science and technology at the 25th Rare Earth Research Conference. The triennial event is marked by the presentation of the Frank H. Spedding Award for Outstanding Contributions to the Science and Technology of the Rare Earths. This year’s recipient, William J. Evans of the University of California, Irvine, is a pioneer in the area of lanthanide-based reduction chemistry. His groundbreaking suite of reduction reactions involves not just europium, ytterbium and samarium, but all the metals in the lanthanide series. Previously considered impossible, the development of these new types of reduction reactions has carved a new niche for the rare earths and may have significant implications for energy research. 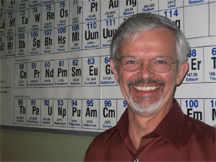 Fullerene chemist Luis Echegoyen of Clemson University reported breakthroughs in his “trapped buckyballs.” The conformation of these molecular cages changes depending on the trimetallic rare earth nitrides trapped inside – namely gadolinium, neodymium, promethium and cerium – allowing for their isolation and determination of their electrochemical behavior.

In the area of materials science, James H. Dickerson of Vanderbilt University has assembled europium oxide nanocrystals into both translucent and opaque thin films, which can be employed in photoactive coatings and dielectric devices. His research group has produced stable, monodisperse (i.e. not aggregated), sub-3 nanometer europium, terbium and gadolinium oxide nanocrystals with the robust optical properties desirable for use in high-resolution video displays and luminescent probes in immunoassay applications. Possibly the most interesting aspect of Dickerson’s research is the discovery of unexpected magnetization reversal in the smallest europium sulfide nanocrystals, which have a diameter less than 2.0 nanometers.

In the area of solid state cooling, work has been done by T. Takabatake of Hiroshima University in Japan which shows promise for cerium, ytterbium, and europium-based thermoelectric materials.

Biomedical applications such as lanthanide-based nanoprobes for MRI applications are also a prevalent area of research. Highly sensitive, nanoscale probes have many advantages, including the potential to detect changes occurring at cellular and sub-cellular levels. The lanthanides are of particular interest because their unique paramagnetic properties may provide magnetic resonance multi-contrast imaging probes, as investigated by Enzo Terreno at the Molecular Imaging Center at the University of Torino, Italy.

Also on the horizon are cleaner, more efficient methods of extraction and separation of lanthanides and their chemical cousins, the actinides. This is good news for both the rare earth mining industry and the environment. Highlights from the conference include dithiophosphinic acids (DPAH) and phosphonium ionic liquids such as Cyphos®. The DPAHs have been recently developed by Dean R. Peterman et al at the Idaho National Laboratory and can separate americium and europium with a separation factor of ~100,000 at low pH, resulting in a derivative that is stable for long periods when exposed to ambient atmospheric conditions.

As the field of rare earth research grows, so does our understanding of the fascinating electronic, magnetic and optical properties of the once obscure lanthanides. Consequently, the scientific community will come to use these chemically coherent elements as a “17 position dial,” as described by Paul C. Canfield, of the Ames Laboratory and Department of Physics at Iowa State University. With increasing precision, properties such as the size of the unit cell, anisotropy, and band filling can be tuned to suit a wide range of applications.