Over 100 delegates enjoyed two days of presentations and networking in Hong Kong on November 4-6. Representatives hailed from all corners of the globe and there were presentations from the UK, China, Japan, Australia, Canada, the US, and Russia. 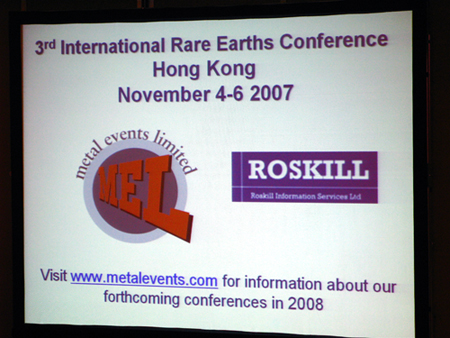 Roskill opened the conference with an excellent description of the history of the Rare Earth market (Roskill has just released a 310-page document detailing the REE industry which is now available for purchase). They provided much in the way of perspective — even with today’s high prices, we are not yet approaching some stratospheric highs from the past. Also, it was made clear that the REE ratios in the ground do not reflect what the current market needs — described as “The poor hand that nature has dealt REE”. The question of whether current reserves are economic was also entertained. In addition, Roskill provided the most up-to-date projections in the industry, with demand projected to be at 185,000t by 2012. There will a significant shortfall in supply (approximately 50,000t) that will most likely have to come from markets outside China.

Balance was a key concept that was emphasized throughout the conference. There is the possibility that 250,000t of REE may have to be produced in order to provide the 185,000t of elements needed by the market by 2012. This is a reflection of the distribution of Rare Earths coming out of the ground. Also key is that China is becoming the key consumer as well as producer in the business. We were reminded that the REE market was flat from 2001-2004. If there is an economic downturn, how will the REE industry fare?

The view from the Shangri-La Hotel, where the Conference was held: 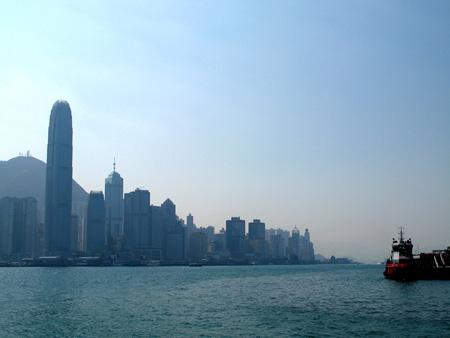 The environment also played a role in the conference. Although mining issues were certainly discussed, most environmental discussions revolved around the eco-solutions that REE provide. Hybrid cars, auto catalysts, motors used in wind power generation, compact fluorescent bulbs, and lighter materials all use REEs in one form or another.

Several Russian projects were put forward as possibilities for future supply. But, as many of the world projects, they are often in isolated locations that will require significant infrastructure and investment. However, Russia does seem to have some projects with very high REO percentages.

A South African project (which came as a surprise to many conference participants) was also mentioned.

Molycorp presented the details of “Project Phoenix”, which entails the restarting of the Mountain Pass mine in California. The separation plant at Mountain Pass was previously closed in 1998, and the mine placed on standby in 2002. There is hope that this past giant of the industry will take up part of the impending REE supply gap by 2012. Apparently all of the critical permits are in place, and they intend to resume mining in 2010/2011, with full operation in 2012. When fully operational, Molycorp may generate 17,500-20,000t per year from Mountain Pass.

Other mining companies that presented were Lynas Corporation, Great Western Minerals, and Arafura Resources. Lynas spoke briefly about Kangankunde as well as their Crown Polymetallic deposit, Great Western gave some information about their new Utah project, and Arafura explained the current status of Nolans Bore.

There were several presenters of interest from China. We were made aware that Sichuan province (a significant REE mining area in China) is making efforts in three areas of its mining operations: environmental protection, safety, and consolidating mining rights (such as shutting down small secret mining operations). Also, they informed the attendees that they have been told to recommence mining operations immediately by Beijing — as they had ceased production for months. They now have until the remainder of the year (!) to make their quota of 21,000t or risk having their quota for 2008 reduced. Those picks and shovels better start shredding some rock in Sichuan!

Presenters from China also made it clear that Bayan Obo, the largest Rare Earth mine in the world (providing around 50% of world REE), is primarily an iron mine. The operators of the mine are much more concerned with the iron output, and because of this may shift production to a different (lower REE) location within the mining operation. Also, it was pointed out that only 10% of REEs are recovered from the current mining process — because of this the tailings are being researched as a secondary supply of REEs for the future.

As presented by Rhodia, the main drivers of the REE industry are auto catalysis, phosphors, magnets and glass polishing.

As a whole, the Conference was extremely worthwhile, and many of the industry’s most significant players were there. Kudos to Roskill and Metal Events for a fine Conference!